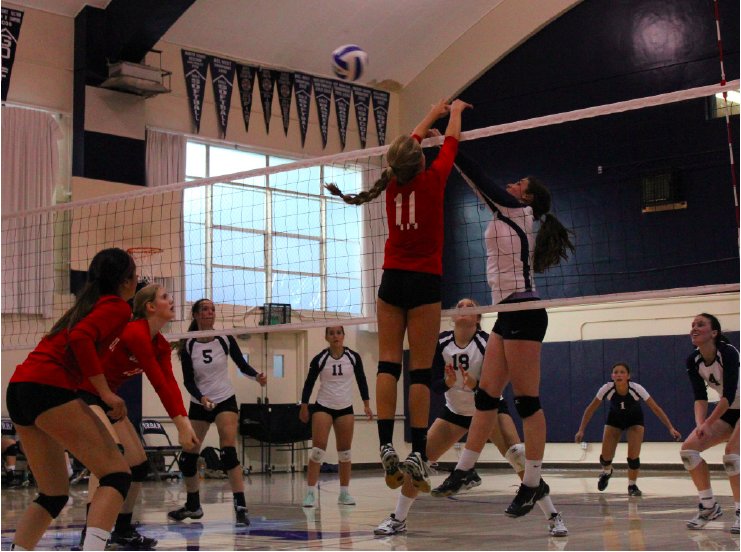 Tip! Devan Gallager ('15) scores a point in a loss to University on Sept. 28. Historically, volleyball matches with Urban have been dominated by the Red Devils.

During his first month on the job, Greg Angilly was cleaning a closet when he found a curious artifact from Urban’s long gone sports teams — the mysterious “Blue-Red” bell, which once represented a powerful rivalry between Urban and University’s baseball teams.

The tradition of the Blue-Red bell, created by former Urban Athletic Director, Anthony Thomas, required the winner of the baseball season to keep the bell until the two teams squared off on the diamond again.

“The tradition of that bell was whoever won the baseball series got to keep the bell. When Brendon (Blakely)” — the athletic director who replaced Thomas — “took over, the bell went away,” recalled Angilly.

“I was in the equipment room, and saw this blue-red bell … and I thought ‘let’s do this,” Angilly said. “Let’s take the bell out every time we face off against University in a sport, and if we beat them, we let the team ring the bell in front of the whole school.’”

Over the last few seasons, to Urban athletes’ delight, the rivalry bell has rung more often. As Urban athletic teams begin to challenge University’s dominance in men’s basketball and women’s soccer, as well as a few others, the question must be posed: Is there a rivalry between Urban and University?

The answer seems to depend on who you ask. Lower classmen, along with Urban’s athletic directors, say definitely yes.

“I think that University has created a name for itself in academics and sports and everyone wants to beat them,” said Benjamin Lee (’17) at an Urban-University varsity soccer game on Sept. 18. “Every school wants to feel superior, and University prides themselves at being good at everything.”

“I would say the rivalry between Urban and University has been going on for 15 plus years,” remarked Angilly. “I think Joe and I have chosen to say ‘let’s make it a bigger deal’ and let’s call it what it is: they’re good and they win a lot and we want to beat them because they’re kind of a measuring stick.”

But upperclassmen aren’t showing any fear.

“When I spoke to my sister,” said Zoe Meneghetti (’17), whose older sister is a junior at University, “she said something along the lines of ‘I hope you didn’t say anything that makes it seem like we see you as a rivals because that’s embarrassing to us.’”

“I think there is a rivalry between every school and University… I don’t think they view us as any competition, but I think that they would be furious if they lost to us,” said Nikki Kimzey (’15).

For a rivalry to exist, some students said, Urban and Uni must be athletic equals.

“I think there is no rivalry whatsoever, because, I think, in order to classify something as a rivalry, teams need to beat each other in equal amount(s), where you can say ‘I’m going to this game thinking I can win,’ and I think most of the teams at Urban do not think they can beat University,” said Luke Hirschhorn (‘14).

“You go to games and you see a group of Uni fans and they’re all cheering, and when you go to Urban games you see a couple kids and they’re all spread out, and not really together. And I think that all plays into the fact that Uni takes sports much more seriously than Urban does.

“We want to be competitors in the BCL West, so we need to change that,” Hirschhorn said. “And that doesn’t come from just the athletes, it comes from the student body as well.”

Unfortunately, in this new year, many of the previous star athletes have graduated, leaving much possibility for the potential rivalry to crumble if Urban’s many athletic teams cannot uphold the precedent they set in their previous years (see “Boys basketball faces challenging year,” below).

Whether or not there’s an actual rivalry, Urban students and coaches definitely have their eye on Uni.

“I think if you were interviewing Joe, he’d say talk to me in March after we’ve beaten them, and I’ll tell you there’s a great rivalry,” said Angilly. “Right now, they’re the team we’re trying to beat.”

“As one of their boys said, ‘we didn’t care so much about Urban until they started ringing that darn bell,’” Angilly said. “And now they want to beat us because they don’t like when we tweet ‘Ring Ring.’ It’s been fun.”