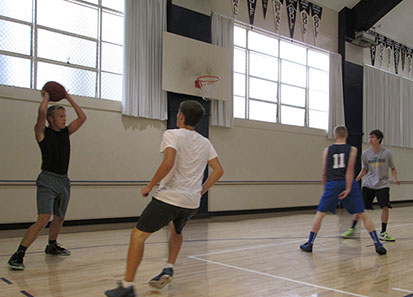 HEADS UP! Andrei Dolezal ('15) (left) looks to pass defender Ben Geffner ('14). Skiffer expects players like these to step up their leadership skills and ability.

Every sports coach, at some point in his or her career, has had to face the question that legendary country singer George Jones once sang about: “Who’s going to fill their shoes?”

Fans of the 1998 Chicago Bulls were riddled with fear for the upcoming 1999 season without star player and basketball legend Michael Jordan, after he announced his retirement. The same was true last year, when All-American quarterback Andrew Luck left Stanford University for the NFL.

How could such iconic sports dynasties continue on without these pivotal franchise players? Bay Area sports fans would be appalled if Buster Posey of the San Francisco Giants, or Colin Kaepernick of the 49ers, were to suddenly announce retirement.

A similar feeling might have sat in the hearts of many Urban basketball fans as the seconds winded down in round two of the California Interscholastic Federation North Coast Sectional finals on Feb. 23. When No. 33 gazed up at the lights of Kezar Stadium for the last time, Nate Cohen (’13) had had one of the most celebrated high school sports careers at Urban. He averaged approximately 20 points per game, 10 rebounds, and 10 assists in his senior year. Harrison Golding (’14) said that his former teammate was also “an overall team leader by example on and off the court.” “Losing impact players is just part of the process in basketball and sports in general,” said varsity basketball coach and assistant athletic director Joe Skiffer. “The older guys head out, and the younger guys see it as a challenge and an opportunity to step up. People may have doubts because of key players, but ultimately, this fuels the team.”

We do not yet know how this year’s boys varsity basketball team will perform, but Urban sports fans don’t have to look far to find a similar situation. After a respectable 4-4-2 record last season, Urban boys’ soccer has started off this 2013 season on a strong foot despite losing standout player, Gabe Kaufmen (’13). As of Oct. 18, boy’s soccer has posted a 6-7 combined record.

Is this an indication of success to come for boys’ basketball as well? History hints at a “yes.”

In his senior year, quarterback Andrew Luck of Stanford led the Cardinal to an 8-1 season. The year after, sophomore Kenin Hogan took over at the quarterback position and led the Cardinals to their first Rose Bowl victory in four seasons after posting an 88-win percentage.

In 2010, after the graduation of the Heisman-trophy winning quarterback, Robert Griffin III, Baylor University posted essentially the same record the following season, despite having a much lower quality player at the quarterback position.

Skiffer said that younger players will always step up to the challenge of taking over after a star player moves on.