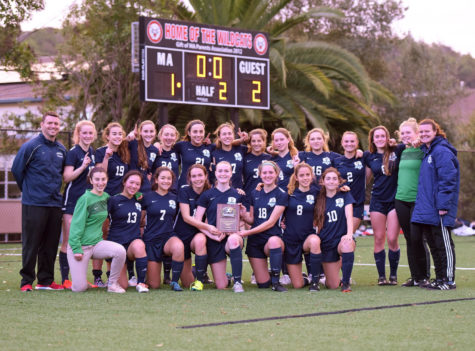 Though California Interscholastic Federation Law 600 intends to prevent the overworking of high school athletes, it has ended up having unintended gendered consequences in athletics at The Urban School. The law states that “A student on a high school team becomes ineligible if the student competes in a contest on an ‘outside’ team, in the same sport, during the student’s high school season of sport.” This means that a student cannot compete simultaneously on a school and outside team. The first infringement on this rule is punished with ineligibility to compete on the school team for twice the number of games competed with an outside team. Additionally, all previous games the student played with the school team must be forfeited. A second infringement makes a player immediately ineligible to compete with the school team for one year.

Players on the Urban girls’ varsity soccer team compete solely with the school team during the winter season while many Urban boys varsity soccer players continue to compete with their club teams during the fall school season. They are able to do this without punishment because of this exception to CIF’s Law 600: “Bylaw 600 shall be in effect only during the winter high school soccer season. High school soccer programs that compete during the fall or spring season are not subject to Bylaw 600.”

The application of this regulation is based on season, not gender. Since the boys currently play in the fall, the regulation does not apply to them. However, similar to peer schools like University High School, Lick Wilmerding, and Marin Academy, the Urban boys varsity team will be playing in the winter starting next year and will therefore be subject to the restriction of simultaneous club and school competition.

Urban’s Athletic Director, Joe Skiffer, said he likes the separation of club from school that the regulation establishes: “I feel at a certain point the club season should stop. I think there’s something special about playing on your high school team with your schoolmates.”

Urban girls varsity soccer coach, Bobby Quinlan, recognizes an elevated training environment since the team’s transition to the winter in the 2015-2016 season. “It has improved our school style of play and team dynamics,” said Quinlan.

Quinlan said that there has been recent resistance to the regulation because “families and students feel that a governing body should not have control on the amount of time and with what entity they play or train.”

However, having the freedom to compete for both teams at once has proven very strenuous for players in the fall and spring seasons. As an underclassman, varsity soccer player Ari Gamshad (‘18) would go straight from Urban practices to club practices a couple days each week. “It’s so much work on your body,” he said.

Similarly, graduated soccer player Charlotte Pohl (‘17) recalls challenges of playing both club and school team sports simultaneously when the school season was still in the spring. Pohl said, “The physical strain of not having time to recover was definitely more challenging than school work for me.” She sometimes would have a soccer practice or game everyday for two to three straight weeks without a break. She said “there was always underlying pressure to be more committed to one team.”

Gamshad now prioritizes the school team over club soccer. In fact, he plans to quit his club team soon, because he “didn’t want to play on the weekends after playing three games and practicing during the week.” However, he acknowledges that prioritizing club soccer had its benefits when he was an underclassmen: “I wasn’t playing that much on varsity as a freshman so getting to play games with club was useful.”

The intent of the regulation is to prevent the overworking of players that both Gamshad and Pohl have experienced. This problem seems to be fixed for our girls players and hopefully will be next year for the boys when they move to the winter.