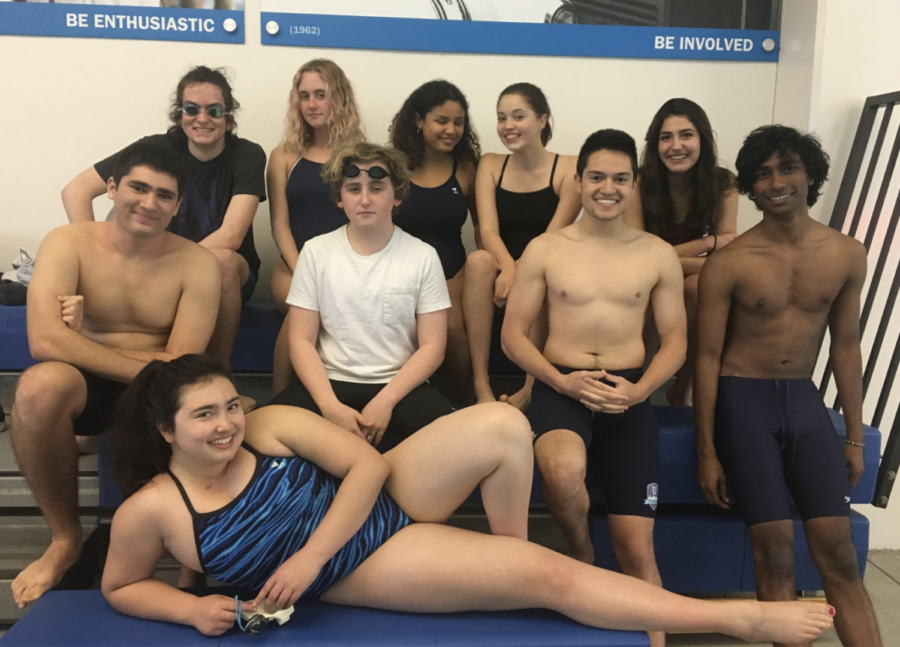 Last place. It isn’t a place that many high school teams would like to accept, but for Urban’s swim team, accepting a loss does not mean accepting defeat.

Some credit this acceptance of mixed results to the team’s size. Urban’s team has only twelve members, while opponents such as Marin Academy’s team has 28 members.

Henry Lipson (‘21), a first-time member of Urban’s team, also said that “because of our size we always have a happy attitude about it, whether we win or lose.”

Although the team does not win as many competitions as other Urban teams,  many of the swimmers expressed appreciation for the team attitude at meets and competitions.

“During meets, we really support each other and cheer no matter if the person is slower or not, and it makes meets a lot more fun,” Eve Meehan (‘20) said.

Team captain Jade Barnblatt (‘18) is in her fourth season on the team. In her years as an Urban swimmer, she has found that “cheering on teammates is very effective in helping [them to] push harder … The support lifts our whole team’s spirit.”

Coach Catherine Shinn agreed, saying, “[cheering] gives you that extra ‘oomph’ to get through that daunting last lap and keeps the rest of the team involved in the meet.”

Although Shinn and team members agreed about the value of the team’s attitude, assistant coach Madeline Nielander had a different perspective.

“I think there’s a little less team spirit, just based on [which team members] show up to things,” Nielander said. Nielander was a high school swimmer in Orange County, and said that comparatively “it’s not as big of a sport as in Southern California, it’s not as much of a big deal, so [swimmers] don’t take it as seriously or put in as much effort.”

Despite this, other swimmers mentioned the team’s welcoming and encouraging atmosphere. This makes it a great sport for beginning swimmers to join, as opposed to other Urban teams where there is often pressure to perform at a high level.

“I definitely think that it’s one of the best sports to join as a beginner,” Sofia Vittoria-Fields (‘20) said. “The team and coaches are really nice, and have helped me improve by so much since I became a part of the team … I was nervous joining the team, and the support definitely helped me feel more comfortable.”

Meehan also said that “the faster swimmers are really nice and helpful to the beginner swimmers,” a statement that was echoed by other team members.

There are “varying levels of experience” in the team, Shinn said, and one of her favorite parts of coaching is bringing everyone together into a “close knit and supportive team.”

Despite the one-mile swim, seemingly impossible meets and endless laps, the swim team has supported each other and learned the value of being on a team and doing one’s best, instead of simply focusing on the goal of winning.