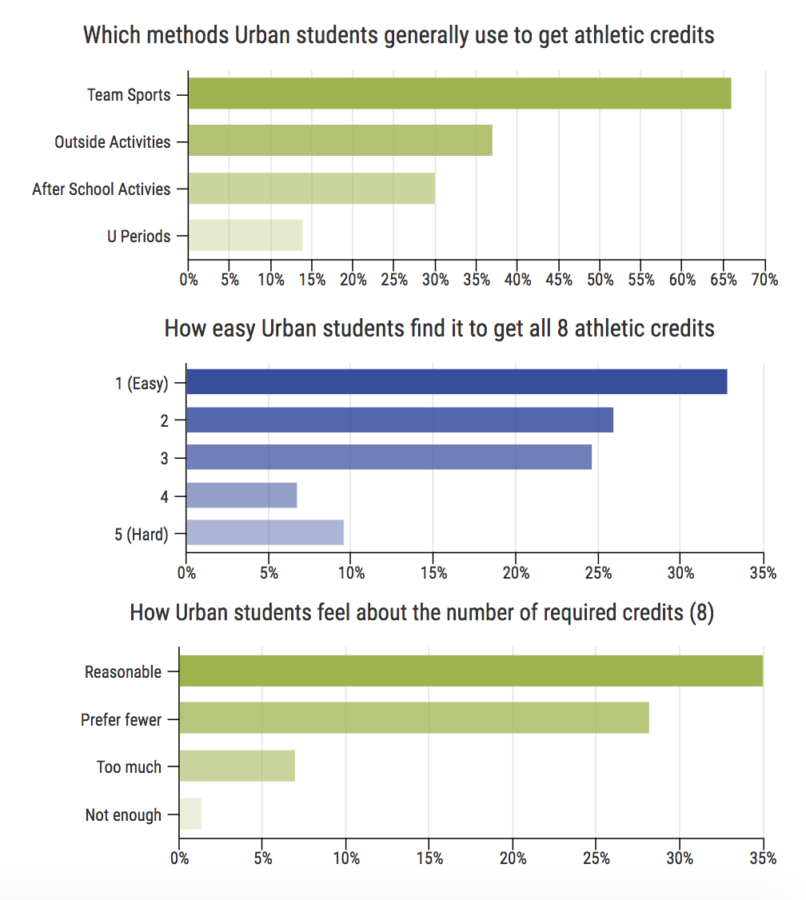 Results of survey taken between Jan 15 and 18 of 73 Urban students regarding the athletic credits system. By Kian Nassre, Web Editor

With 26 competitive teams and a wide range of physical activities that occur during class periods and after school, sports are an integral part of the Urban experience. According to Urban’s website, more than 65 percent of students participate in a team sport, while others participate in other athletic classes.

The website also says that “The [athletics] program is designed to promote and affirm the ideals of respect, discipline, integrity, commitment, physical fitness, sportsmanship, leadership and teamwork, while engaging students fully in mind and body”. With those goals in mind, the Urban Athletic Department requires that a student acquires eight athletic credits by the time of graduation, earned either from team sports or athletic classes in and outside of Urban.

This requirement has been altered by the athletic department and Charlotte Worsley in recent years. According to Kali Heys, the Assistant Director of Athletics at Urban, in the past “[they] had noticed that sometimes seniors were not getting all the credits that they needed and that students were getting one credit for being on an Urban sports team that practices six days a week and one credit for doing an afterschool PA that met twenty hours in a term”. To fix the latter of the two issues, those involved worked to fairly distribute the credits earned through different forms of athletic activity. With this in mind, varsity sports now earn participants 2 credits, as opposed to the previous 1 credit.

When asked to explain the goals for requiring students to participate in some form of athletic activity, Heys said that “the goal of the program is just to be active. We just want kids to find what they enjoy doing and that they can do throughout their lives in order to be active and be healthy and get moving”.

Students also have their own opinions on the athletic credits system. Samuel Levine ‘21 said, “While I do think that it is important to be physical for your brain and body, I think it should be easier to get credit. I think [students] should be able to go for a walk three times a week and earn a credit for that.”

Another student, Ellie Lerner 21’, shared her opinion, saying “I think what is great about [the credit system] is that it really encourages people to take part in school sports. I also like that Urban offers such a wonderful variety of activities, and makes an effort to have options to fit most students schedules.”

While many students are opposed to aspects of the athletic credit system, a survey of 73 Urban students conducted between the Urban Legend and the Urban Community revealed that the majority of students find the system reasonable. More than 55 percent of students answered that they found the number of credits required to be reasonable and easily attainable.