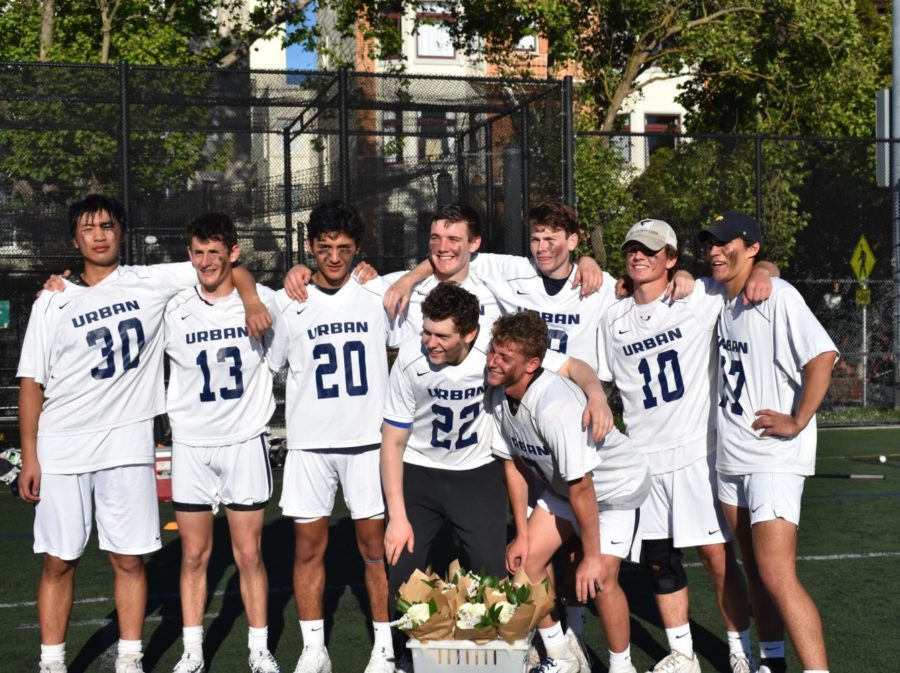 Loki Olin and Editor of Features

The Urban boys lacrosse team trudged off the playing field and toward the sideline. They had just been defeated in a May 8 North Coast Section game against Piedmont High School, bringing the 2018 season to a close. The players expected to commence with their standard post-game huddle, but something was amiss: Their head coach, Nolan Godfrey, was nowhere to be found. “He was just gone,” Tikloh Bruno-Basaing ‘19 said. “We got ready for the post-game talk and he was just gone.” The team would not see Godfrey again.

The abrupt end to Godfrey’s time at the Urban School was nothing new to seniors like Bruno-Basaing, who have played under four different head coaches throughout the past four years.

As the team enters the offseason, another challenge has arisen: The school will need to recruit at least four new players in order to compensate for nine graduating seniors and form a team for the 2020 season. With the future of the team resting on uncertain ground, The Urban Legend talked to current and former Urban boys lacrosse players to gain insight into the team’s tumultuous past and unorthodox approach to the game.

Urban boys lacrosse coaches’ short-lived tenures serve as the clearest indication of the team’s unique identity. Urban’s Athletic Directors Joe Skiffer and Kali Hayes described their experience hiring coaches for the team: “Challenging is the first word that comes to mind… It has been difficult to find the right fit,” Hayes wrote in an email correspondence with The Urban Legend.

Part of this challenge stems from the team’s unusual independence from their coaches. By electing to take on responsibilities typically held by a team’s presiding coach, Urban boys lacrosse has evolved into a player-run organization — one that multiple players have described as “uncoachable.”

“We were a player-run team [this year], let me make that clear,” Jake May ‘19 said. “All the defensive schemes are orchestrated by our two defensive poles. Our captain, Ben Miller, leads our entire defense. We’ve gotten a lot of help from a freshman, Lochlain Steere. In terms of offense, I’ve had to create a lot of the offensive schemes that we have,” May said.

Former player Thibault Jamey ‘20 attributed the players’ roles in forming plays to the team’s familiarity with the game and a preference for self-sufficiency as opposed to outright defiance. “The players aren’t disrespectful [to the coaches], they have just played since they were young and are extremely good,” Jamey said.

“I love [coach] Moran,” May said, echoing the sentiment that players’ larger roles were not a product of animosity toward their coach. “Moran is the man.”

In certain instances, players have also adopted logistical responsibilities regarding preparation for practice. “Aaron Lee brought his own goals to practices when our practices were scheduled at fields with no goals,” William Denton ‘20 said.

During the offseason, players feel that a lack of schoolwide interest has hampered the lacrosse team’s efforts to establish a stable roster. “There’s no attention to the sport,” May said. “We don’t get players. We’re usually trying to create them when they get here.”

Aware of students’ dwindling interest in the sport, Skiffer and Hayes have taken multiple measures to encourage participation: “We talk to admissions and let them know there is a need [for players], [and] we work with returning leaders of that team to get the word out and host informational lunch meetings. Joe recruits kids on campus that he thinks could be interested,” Hayes wrote.

Players’ varying levels of dedication sparked a conflict during the conditioning phases of practice. “We did seventeen sprints up and down the goal line. We only did that once a week, but we were pretty lazy guys, so [when coach Nolan Godfrey] busted it out, we would be pretty pissed,” Bruno-Basaing said.

May said that the necessary inclusion of players new to the sport made it difficult to maintain a high level of motivation for the whole team: “Lack of commitment often burdens our squad.”

Disputes over conditioning perpetuated the tense relationships between the coaches and players. During a particularly intense workout, “the whole team walked off the field one practice,” Bruno-Basaing said.

As the lacrosse team’s culture became increasingly player-centric, chemistry between teammates was paramount to the team’s cohesion. “What we lack in dedication, we make up for in team spirit. I made bonds with sophomores and freshmen this year that I definitely wouldn’t have otherwise,” May said.

May felt that this sense of unity was what allowed the team to remain intact over the past four years. “When you’re going through something together as a squad, you get through it,” May said.

However, the boys lacrosse team — along with Skiffer and Hayes — may not be able to muster the participation needed to form a team next year. For a group that has faced a myriad of challenges in recent years, the prospect of the team’s demise is difficult to accept. “I’ve been trying to put it out of my mind all year,” May said. “It makes me sad because I loved playing for Urban. But I don’t think there’s going to be a team next year, to be honest.”