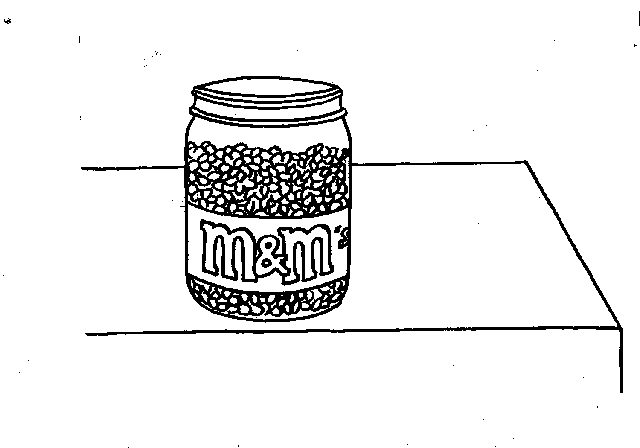 Image of a jar of M&Ms. Illustration credit: Loki Olin.

On October 14, 2019, The Urban School of San Francisco gathered together in an all-school meeting and celebrated National M&M Day. Even though the state of California recognized that day as Indigenous Peoples’ Day, the holiday was not mentioned, other than a dedicated minute of silence at the end of the meeting.
Amy Argenal, service learning and history teacher at Urban, said, “I think it was a huge miss on our part, from my point of view. Just not honoring the day, in general, is just a huge oversight on what the day could represent.”
In 1990, South Dakota was the first state to change Columbus Day to Native American Day as part of the state’s year of reconciliation with its tribes. Over 100 universities, municipalities, and states have followed in South Dakota’s footsteps of celebrating Indigenous Peoples’ Day on Columbus Day. The day is often marked by celebrations of Indigenous Peoples’ history and heritage, which may include cultural events, vigils to mark the deaths of Indigenous People at the hands of Europeans and healing gatherings.
Willow Brown ‘22, an Urban student with Native American ancestry, said that when Urban chose not to dedicate ASM to Indigenous People’s Day, they went against the school’s core values. The Urban School core values state, “we honor the uniqueness of each individual and embrace diverse backgrounds, values, and points of view to build a strong, inclusive community.” “It felt exclusive to me personally,” Brown said. “I was pretty frustrated with the fact that they didn’t dedicate anything to it at all.”
When asked about why M&M Day was celebrated on Indigenous People’s Day, Charlotte Worsely, Assistant Head for Student Life, said, “We haven’t had a group that wanted to lead something around [Indigenous People’s Day], either a group of faculty or a group of students.”
Argenal believes this highlights that “we don’t have a large, vocal Indigenous community at Urban. That allows us to not think of where our blindspots are if somebody’s not pointing them ahead of time,” she said.
The Urban Student Committee explained that they did not dedicate the all-school assembly to Indigenous People’s Day because “it wasn’t on our radar.”
Brown said that she has seen this trend throughout her time at Urban: “Being a mixed person of color and of different religions, it’s been a lot of my experience at Urban that the celebrations and cultural aspects of my identity are being overlooked,” she said.
In contrast, some members of the Urban school community argue that if Urban chooses to celebrate October 14 as Indigenous People’s Day, the administration would be imposing its opinions on the student body, rather than allowing students to come to their own conclusions. Choosing to celebrate neither Indigenous People nor Columbus would align with the Urban history departments’ decision to call the interactions between Native Americans and Europeans “encounters” rather than using more charged words like “genocide” and “ethnic cleansing”.
Asante Spencer ‘20, Co-President of the Urban School Student Committee, said, “I don’t think we should be promoting Columbus Day, but I also don’t think it’s necessarily something we need to ex out.”
Looking forward to Indigenous People’s Day next year, Melia Filipow ‘20, co-leader of the Anti-Racist White Privilege Awareness (AWPA) ally space at Urban, Argenal, and Brown all agree. Urban needs to do more to celebrate Indigenous Peoples’ Day if the school wishes to stay true to its core values. “[A speaker] brings a whole new level of seriousness to a day like Indigenous People’s Day that we should be remembering,” Filipow said. “There are opposing views on every single brutal person in the world, [but] that doesn’t mean we have to be neutral.”
“We need to be explicit: do we take the day off or not?” Argenal said.
Looking forward to plans for Indigenous People’s Day next year, Worsley said, “If we did something wrong, let’s learn from it and grow. However, it can’t just be about checking a box and assuaging white guilt, it has to be about honor, and I would need some help to understand the best way to honor Indigenous People.”