The US experiences a surge in social distancing protests

The shutdown of many non-essential businesses and the implementation of social distancing protocols by local officials have left a number of citizens in distress. As a result, individuals worldwide have taken to the streets, protesting, together, the stay-at-home orders with the hopes of returning to “normal” life.

Protests against social distancing have popped up around the globe in places like Mumbai, India, Berlin, Germany, and São Paulo, Brazil. Most recently a surge in similar protests has started in the United States across the nation.

The first major protest held in the United States was in Lansing, Michigan on April 15th, 2020. Protesters who wanted to get around social distancing measures decided to enact ‘Operation Gridlock.’ This was a strategy where citizens would protest from their cars by blockading roadways. However, protesters quickly began to disregard social distancing regulations by getting out of their vehicles and rallying in clusters on foot.

The protest in Lansing was organized by the Michigan Conservative Coalition, an organization affiliated with Trump’s 2020 re-election campaign. Many protesters have taken the words of the president as encouragement, continuing to resist local authority and express their anti-social distancing beliefs.

Governor Gretchen Whitmer of Michigan faced a lawsuit proposed by four Michigan residents on the basis that her social distancing orders encroached on their first and fifth amendment rights. Shortly after the accusation, the Michigan Court of Claims did not find her guilty of infringing on any of these Constitutional rights. Despite the outcome of the decision, citizens continued protesting, exercising their right to free speech.

In a statement to reporters referring to the on-going social distancing protest in Michigan, President Donald Trump said, “these are people expressing their views…they seem to be very responsible people to me.” He later tweeted in all capitals, “LIBERATE MICHIGAN.”

In succession to Trump’s “LIBERATE MICHIGAN” tweet, he also sent messages saying “LIBERATE MINNESOTA,” and “LIBERATE VIRGINIA,” revealing his support for these protests and protesters. However, these are not the only states that are facing demonstrations. Cities in Kentucky, Utah, North Carolina, Ohio, and California are finding resistance towards stay-at-home orders as well.

Washington state, the state which had the first U.S. COVID-19 case, hosted a rally against social distancing measures for more than 2,000 people, all of whom were standing relatively close, some without facial masks.

In California, protests occurred statewide, from Sacramento to Los Angeles, as a result of Governor Gavin Newsom’s declaration of a shelter-in-place order on March 19th, 2020. While live streaming, one of these protesters called Governor Newsom “a dictator.” In response to this comment, Newsom acknowledged the anxiety surrounding the shelter-in-place orders in his daily press briefing. However, he also said, “we must have a health-first focus if we’re ultimately going to come back economically.”

In Denver, Colorado, healthcare workers staged a counter-protest by standing in between cars protesting. Some workers were applauded for their hard work, while others were verbally harassed. One woman leaned out of her car holding a sign that read ‘Land of the Free.’ She then compared a communist state to the closure of non-essential businesses saying, “If you want communism, go to China. Now open up and go to work.”

Some governors have tried to appease both sides by speaking to protesters while following recommended guidelines to reduce the spread of COVID-19. Ohio’s Governor Mike DeWine said, “the only thing that I’ve asked our protestors to do is to observe social distancing.”

When asked how individuals could protest responsibly, Elijah Leshnick ‘21, said that “they can protest from their cars, they can send letters to lawmakers, they can call lawmakers on the phone. But going out and not social distancing just defeats the purpose.”

The desire to open up the economy has led to debates regarding how and when to re-open non-essential businesses amid this COVID-19 crisis. While some believe the economy should be prioritized, Lesnick believes, “when you’re dealing with human lives, you shouldn’t go by the rule book.” 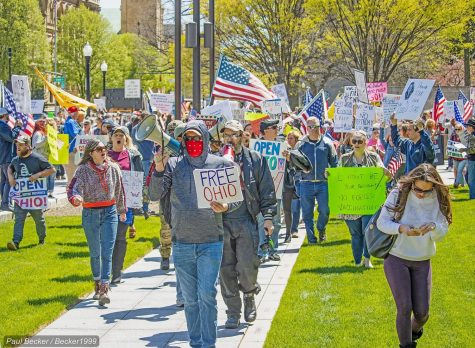