Politics vs. science: the politicization of COVID vaccination

The topic of COVID-19 has been dominant in most discussions relating to the 2020 election within both major political parties. In the last few months of the race, President Donald Trump promised that a COVID-19 vaccine would be ready by the end of the year. Despite his claims, the exact timeline of Operation Warp Speed, the Trump administration’s initiative to develop a COVID-19 vaccine, is unclear. However, the president’s words illustrate how the politicization of the vaccine may bring hope to his supporters while allowing him to undermine institutions he’s often criticized, such as the Centers for Disease Control and Prevention (CDC).
Since the onset of the pandemic, Trump has made efforts to tarnish the CDC’s credibility, and has attempted to portray himself as the only reputable source for COVID-19 information. His COVID stance, which is largely devoid of CDC influence, has resulted in the U.S. having the fourth highest mortality rate in the world at the time of this printing. Despite the United States’ inadequate COVID-19 response, Trump has consistently defended himself with the promise that the U.S will have a vaccine by the end of 2020.
In support of Trump’s promise, it is known that multiple investigational vaccines have reached phase 3 clinical trials. Operation Warp Speed is hoping to complete the development of a safe vaccine by January. According to Urban Infectious Disease Teacher Mary Murphy, this feat would shatter all previous records if it were achieved.
“The fastest vaccine that has ever been brought from the inception of the idea to market is the mumps vaccine. And that took four years,” she said. “So what we’re trying to do here is unprecedented.”
Yet, despite the government’s apparent efforts to rapidly push for a vaccine, Murphy believes that the current administration’s stance has been dangerous.
“The positioning that the White House has taken is really problematic, because they should be separated from this process,” she said. “[Scientists] should be able to follow the process [without] the influence and intervention from the White House, promising it to be ready early.”
According to Murphy, the pressure applied by the Trump administration through its campaign-trail claims will “really undermine people’s confidence in [a vaccine].” This has already happened with “people’s confidence in the CDC [being] undermined [by] over-promising.”
It is also important that one considers the actual merits of a vaccine, or in this case, the lack of merits. Murphy illustrates that the fight does not end once a vaccine is approved. She said, “We are reliant on a vaccine… because we haven’t done a good job. But how do you distribute two doses to 300 million people?”
Our nation’s reliance on a vaccine is imminent, yet the government has interfered with the process of vaccine trials through its own pressure from over-promising. This has enabled the COVID-19 vaccine to be used as a political tool throughout the presidential race.
The claims regarding when a vaccine will be ready lack backing, and as Murphy stated, will only generate mass confusion and disappointment in the long run. As such, Murphy believes that the politicization of the COVID vaccine has had an overall negative effect upon the U.S.
“I’ve started to hear more people say, ‘well, we’ll have the vaccine come January,’” she said. “And I don’t want to be like a voice of negativity or hazing, but [that] just doesn’t feel realistic.” 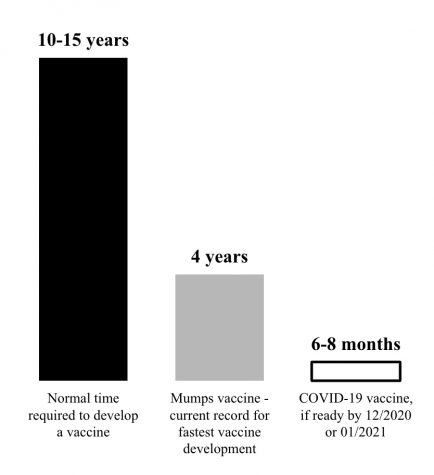