Maintaining Urban: the cleaning processes that allow us to stay in school 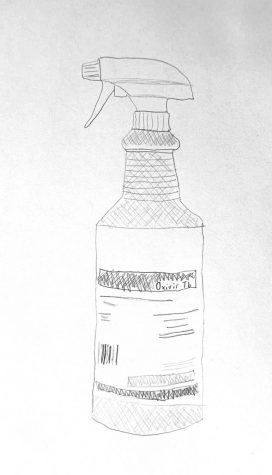 Urban’s return to in-person school has relied heavily on its ability to prove that the campus is sanitary and safe. Demonstrating that the school could operate safely was a rigorous process, and the undertaking of maintaining its safe status is yet another. Urban Facilities Manager David Coffman has overseen much of the work of ensuring that students can return to in-person learning.
“Everything had to be approved by the San Francisco Department of Public Health (SFDPH),” Coffman said. “There was this huge group, probably close to 10 people, from the SFDPH. And they did a very thorough walkthrough, and we had to meet all of their guidelines, which we did.”
This group of city officials was brought in to survey the adequacy of Urban’s pandemic safety measures, many of which are implemented and upheld by the school’s janitorial staff. According to Alberto Padilla, Urban’s janitorial supervisor, cleaning the school has changed significantly.
“Everything has changed in the way that you have to be more careful than before, [not just with] cleaning but with disinfection,” he said. “[We] have to disinfect everything and that reduces [my] time because sometimes people, like a teacher or student, they ask for help in something related to cleaning or being in the janitorial area.”
The addition of new disinfection steps has increased the pace at which the janitors must work in order to complete their job. “Right now, everything has to move faster. It’s kind of hectic, like the changes, everything is faster than before,” Padilla said.
Luis Velasco, a janitor at Urban, elaborated more on the school’s new cleaning protocols. “Besides all the regular cleaning chemicals we use, we added two more,” he said. “One is Oxivir…the good thing about that is that in one minute we kill any kind of virus. The other one that we have that we’ve been using is called Bioesque, and that is based on a botanical chemical and we apply it through an electromagnetic gun.”
The Bioesque spray is unique in its properties as an electrostatic spray. Rather than merely disinfecting the surface, it has the ability to wrap around it, disinfecting underneath said surface. According to Coffman, this step of cleaning takes place at night due to its smell.
These two extra cleaning procedures make cleaning the school take eight hours on in-person days and six hours on virtual days, according to Padilla. On virtual days, the crew disinfects rooms using the Bioesque, which is lugged around in a backpack that Velasco compared to Ghostbusters equipment. In addition, the extensive amount of cleaning required at the school has altered the roles of Coffman and his team at the school.
“It’s a drastic change,” Coffman said. “We’re [usually] more maintenance driven, and we’re involved in the cleaning just as much as janitorial now.”
With regard to cleaning, Coffman said, “It’s pretty much all we do now. Monday through Thursday is cleaning. And then, of course, reactive maintenance.”
Though it is unclear when Urban’s cleaning procedures will return to normal, Velasco indicated that it may not be for some time. “We ordered not gallons, we ordered barrels – 55-gallon barrels of hand sanitizer, 55-gallon barrels of Bioesque,” he said. “We have enough probably for this year and next year, so I don’t think it’s going to change until we get rid of all the products.”
Coffman agrees that these procedures could last, but instead cited general comfort as a reason. “I think we’re gonna have one more school year of dealing with this until everybody’s comfortable,” he said. “And then maybe it’ll start to scale back at that point.”